When my nephew told me earlier this month at a family get together that MAD magazine was about to cease publishing new material, I felt a sadness reserved for the end of an era.  In truth, I had stopped reading MAD regularly decades ago, though I still have half the collection that my cousin and I once thought would be a profitable investment.  There is little doubt that MAD did not fare well after it moved its offices from New York to Los Angeles in 2017.  Even before that, the magazine lost a good part of its rebellious ethos once it decided to allow advertising in 2001.  Yet, despite this slow decline, it was still somehow comforting to know MAD existed in a world that kept getting madder.

My first memories of MAD are rooted in the early 1970’s and the parodies of movies such as The Exorcist, The Godfather, The Planet of the Apes and The Sting.  Mort Drucker was the artist for most of these and his ability to recognizably render such a wide array of movie stars and supporting characters was stunning.  The writers of these parodies alternated between Larry Siegel, Stan Hart, Arnie Kogen and others, but in truth, I could not differentiate between them the way I could if someone other than Drucker was drawing.

Of course, I wasn’t old enough to see many of these movies in the theatre, but my first cultural exposure to them was through the MAD parody.  The true genius of the parody would sometimes not be revealed to me for several years until I had a chance to actually see the movie.  This, of course, was in an era when there was no internet, and no VCRs for that matter, so it meant waiting two to three years after the movie was released for it to be shown (often in a censored form) on prime time television.  What was especially endearing about the parodies is that the writers frequently had the characters break the fourth wall and speak directly to the audience (a technique familiar to television audiences of Saved by the Bell, The Office and Modern Family).  What made this technique so unique in the MAD parodies was that the characters were not speaking to the audience in role, but rather as the actor, possessing a self-consciousness of which pioneering dramatist Bertolt Brecht would be proud.  I particularly remember the parody of The Great Gatsby in which the frequent moments where Gatsby excuses himself to speak on the phone are actually instances of Robert Redford frantically calling his agent to get him out of this bomb of a movie.  No matter the critical acclaim the movie might have received, the MAD parody would focus on a weak spot, whether it be the movie’s slow pace, convoluted plot, derivative nature or plot loopholes.  For some reason, I didn’t feel the television parodies, usually drawn by Angelo Torres, were as captivating as the film parodies.

Of course, there were other regular features of MAD that I eagerly looked forward to reading.  One of these was the back inside cover known as the “fold-in” and conceived by Al Jaffee.  I loved to pore over the image and the text below it to try and figure out the solution.  This was partly a practical measure, as when I began collecting MADs, I felt that actually folding the back cover would alter the condition of the magazine as a collectible and render it less valuable. 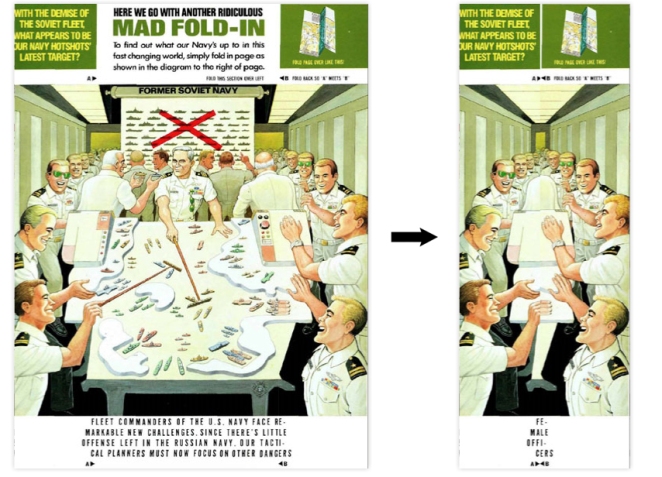 But there was another semi-regular feature of Al Jaffee’s that I loved even more than the fold in and that was his “Snappy Answers to Stupid Questions” segment. 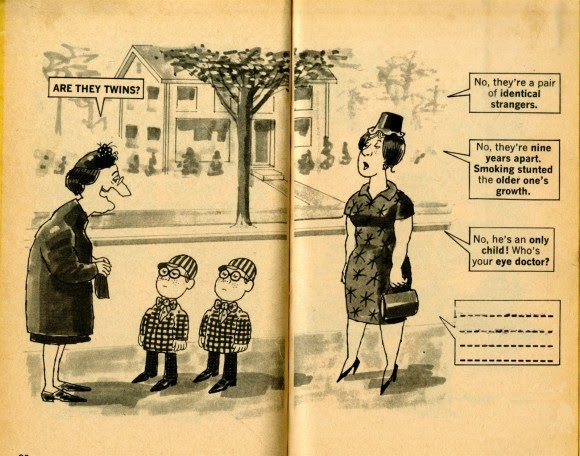 ‘Snappy Answers’ was MAD to a tee.  It featured great visuals, witty comebacks to everyday obliviousness, but most of all, it invited the reader to be part of a community that rejected the banal conformity of a society used to politely tolerating verbal drivel.  Another fun part of the equation is that there would often be an empty dialogue box at the bottom of the sequence encouraging the reader to create their own snappy answer.

Yet another fantastic regular was Don Martin, whose characters featured elongated faces and emitted sensational sound effects.  The violence of the cartoons never seemed at all menacing; rather the characters who were crushed by a falling safe or flattened by a steamroller seemed to be part of a common tragedy we recognized as the all too familiar plight of ordinary folk. 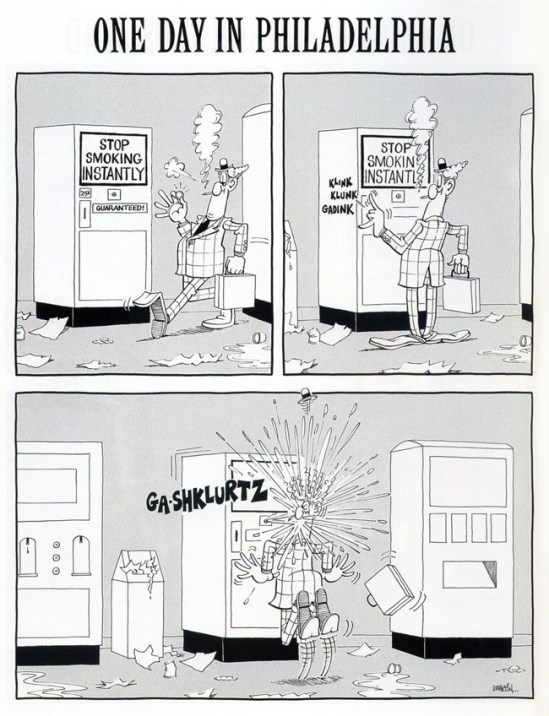 And there were more features that made the magazine something I would relish eight times a year (even its publication schedule was unconventional):  they included ‘scenes we’d like to see’ which upended the cliche and the establishment, various ‘primers’ which presumed to introduce readers to a facet of modern life using phrasing borrowed from children’s books, the ‘do it yourself’ letter of some kind which anticipated “Ad-Libs”,  the iconic ‘Spy vs. Spy’ (why did I always cheer for the Black spy?), the header which pivoted on a pun and preceded an item by labelling it as such and such department, and any manner of items that emphasized the crumminess of consumer products and the emptiness of the advertising that promoted them.

Some parents presumably complained about the low brow nature of the magazine (mine never objected–in fact, they patiently took me to the Madison Avenue office of MAD on my first visit to New York City in 1977–the editorial staff gave me a personal tour, an Alfred E. Neuman poster and treated me like a celebrity), but the truth is that MAD in the 60s, 70s and 80s was the antithesis of dumb humour.  A quick look through the typical edition from these decades will find poetry parodies (with apologies to Edgar Allen Poe, Shakespeare, etc.), political awareness and historical overviews which reveal both a detailed knowledge of historical eras and an obvious delight in teaching their readers a thing or two about history while making them laugh.  The “usual gang of idiots” as the contributing artists and writers referred to themselves could be prophetic too.  A look at the July 1979 issue reveals an item entitled “Re-Writing Classical Poetry to Give Women Equal Time”.  While no-one should expect a serious approach to the issue in MAD, it is revealing that they were picking up on cultural trends years before high schools and universities would address the sexism in their curricular choices.

And, yes, not everything in the magazine was gold.  Dave Berg’s “The Lighter Side Of” was a bit predictable and visually conventional.  And yes, the post-advertising years featured cruder and less intellectual pieces (“Planet Tad” aside) that seemed to be trying to pander to a typical adolescent sensibility (you could never accuse the MAD of William Gaines or Harvey Kurtzman of pandering–they never underestimated their readership, but rather challenged them).  And, yes, MAD’s influence can be felt everywhere from Saturday Night Live to Weird Al Yankovic to the Simpsons to the Daily Show and beyond, so it’s not like we are bereft of satire.  But I’m still going to miss new MAD content.  I’ll miss flipping through the issue at Shopper’s Drug Mart or Indigo deciding whether there were enough quality features to merit purchasing it (no longer “50 cents cheap”).  I’ll miss sharing issues with my two sons who don’t agree on much, but both enjoyed MAD.  I’ll miss borrowing  an issue from or loaning an issue to my cousin Josh who shared my passion for MAD and who housed our shared collection for decades.  But most of all, I think I’ll miss a connection to a past where reading a magazine and sharing it with others provided you with an entry into an informal community of anti-establishment skeptics; a past where people read physical magazines rather than giggling over fershlugginer memes and watching endless you tube videos.

I’m afraid I do in a world without MAD.

One thought on “I’ll miss you MAD magazine”