Why is Our Sense of Wonder Reserved for Outer Space? 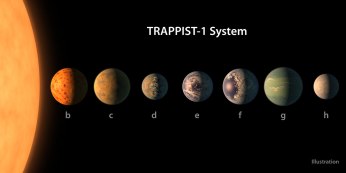 It is genuinely inspiring to see scientists so excited to have discovered seven Earth like planets in the “relatively” close by Aquarian constellation.  The dwarf star around which these exoplanets orbit is some 39 light years from Earth, and when you consider our Milky Way Galaxy alone stretches for hundreds of thousands of light years, you can forgive scientists for considering them to be ‘right around the corner’.  Of course, ‘right around the corner’ in the vastness of space is approximately 229 trillion miles away.  If we were somehow to put a human in the fastest spaceship we currently have, it would take about 817,000 years to reach these exoplanets.

So, it’s not like we will be holidaying or relocating to Trappist b-h in our lifetimes; nor will our grandchildren’s generation likely be making the trip.   Still, scientists view this discovery as significant because given the fact that dwarf stars (stars much smaller and cooler than our sun) are so common in space, the chances are that there are many exoplanets with the potential to reside in the habitable zone and, therefore, contain liquid water and perhaps support life as we Earthlings conceive it.  Another romantic possibility arising from this discovery is that because the planets are so close to one another, it would be possible to be on one planet and see other planets with the naked eye.  Of course space experts were quick to point out that because these planets appear to be tidally locked (one side of the planet is always facing the star), living on the planets would not be easy.  The side facing the star would be unbearably hot and the other side would be stupendously cold.  It might depend on whether the atmosphere could dissipate the heat enough for life forms to tolerate it.  But again, this is neither here nor light years there for scientists.  They are agog about what this discovery could lead to about our knowledge of life and the universe.

All this did get me thinking about something.  Why are humans generally so fascinated (or in some cases perhaps, terrified) with the possibility of alien contact?  Surely, most of us are not naïve enough to think that contact will result in the solution to all of our problems.  Even if aliens somehow had the technology to eradicate poverty, disease and war, human nature would still find something to complain about, to exclude one another over and to kill each other for.  What about the other scenario:  us enriching them?  Certainly, only the most myopic of us would think that we could somehow bequeath our knowledge to another species and not irreparably damage them.  Look at what technology has done to indigenous peoples across our Earth.  Do we dare export to other planets?  Perhaps it is just comforting to know that we are not alone.  We might wreck this planet for humans, but take some solace from the idea that humans are not the sole intelligent life in the universe; that somewhere out there, beings exist who have not poisoned their world and are actually progressing in a sustainable manner.  Maybe it is just our attraction to the unknown; it keeps pushing us further afield.  I do think some of us have a built in desire to know what is out there.  For some, it could be the kind of lofty goal that has the power to unite the fractious clans of Earth.  Communicating with alien life might be a grand enough vision to overcome personal legacy and tribal loyalty.

A part of me is sad too thinking that there are regions of this planet with customs and knowledge that many of us will never get to see or never make an effort to know.  Perhaps on a universal scale, this is provincial thinking, but I think maybe the different types of knowledge available on Earth are a necessary preparation before we embark on the kind of contact celebrated in science fiction movies.  Imagine if we could treat distant people on Earth and unfamiliar customs on our own planet with the wonder and humility many of us reserve for an imagined contact with beings from another planet.  I’m not calling for a halt to funding space research; far from it.  We need all the awe and imagination space exploration can provide.  Wouldn’t it be nice though if we could see the “aliens” here on Earth with that filter of wonder we reserve for stars blinking in the night sky?