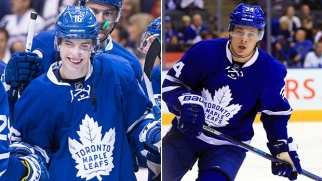 For all the disparity in development between the Toronto Maple Leafs and the Toronto Raptors, the cruel reality is that when they get there, the Leafs will have a better chance of winning a championship than the Raptors.  The Raptors are a more mature team, have proven all stars, a sound supporting cast, playoff experience and a record that has put them up near the top of their conference for a few years.  They also play in the NBA, a league that features a gigantic gulf between good teams and great teams.  The Raptors are a good team.  But good teams do not win NBA championships.  Only elite teams do.  When was the last time that a total upstart won the NBA crown?  It just doesn’t happen.  Last year, Cleveland surprised Golden State in the final, but they were both elite teams.  It was just a matter of which elite team would win.  By elite, I refer to a team that has at least three superstar players and a very competent supporting cast that gravitates to the superstars in the hopes of winning a crown.  I also call elite a team that is so well coached and disciplined that it too attracts phenomenal talent, but decries the concept of superstars (yes that’s you San Antonio).  You have to go back to 1995 to find a sixth seeded team, the Houston Rockets of that year, that won a final.  In the twenty-one championships since then, only once did a bottom four seed even make the final (the 1999 Knicks, an eighth seed that lost to the Spurs that year).  So dominant are elite teams, that the 2007 Spurs and the 2011 Mavericks are the only three seeds to win championships in the aforementioned span; the rest were either first or second seeds in their conference.  A playoff upset in the NBA is a rarity; an elite team being upset is almost an impossibility.  So unless the Raptors can somehow find a way to attract and afford another superstar, they will have to content themselves to being the practice playoff squad the eventual finalists roll over.  Yes, had Kevin Durant signed with Toronto in the off season, things would have been more interesting.  But clusters of superstars attract other superstars and so the Warriors who could not beat Cleveland three superstars apiece, added another.

Now let’s compare this to the NHL.  Teams that can make the playoffs often have a legitimate chance of not only appearing in the Stanley Cup final, but of winning it.  In the same span since 1995 while the NBA saw only three bottom four seeds make the finals and only one win it, there were twelve occasions when bottom four seeds made the finals and three times they won it all (the L.A. Kings in 2012 and 2014 and the 1995 New Jersey Devils).  Just last year, the San Jose Sharks, who were sixth best in their conference, made the final.  In addition, the NHL seems to provide teams with a better opportunity to rebuild and compete.  Even the Chicago Black Hawks, as close to a modern dynasty as the NHL has, were pretty awful within recent memory.  For what happens in the NBA, take a look at Oklahoma City, that had an elite team in the making with superstars Kevin Durant, Russell Westbrook and James Harden, but quickly felt they couldn’t hold on to all of them, so traded Harden and then lost Durant to free agency.  Raptors’ fans are also well aware of the tendency of NBA players to group together in mercenary fashion to try and win a championship.  Chris Bosh may have been the junior partner in the James, Wade and Bosh firm that set up shop in Miami, but the partnership temporarily derailed franchises in Cleveland and Toronto.  LeBron then engineered another triumvirate back in Cleveland with Kyrie Irving and Kevin Love. With a larger roster, an NHL team cannot suddenly become championship material with three players.  Whereas the NHL and the NFL for that matter are leagues that have seen increased parity in the last decade, the same cannot be said of the NBA.  Take a look at the gap between the first place team and the last in the NBA and compare it to the NHL.  Last year, even in the Metropolitan Division which had the biggest gap between first and last place teams, the first place Washington Capitals only had twenty-two more wins than the last place Columbus Blue Jackets.  Compare that to last year’s NBA.  The Golden State Warriors won fifty-six more wins than the Los Angeles Lakers.  Yeah, you might say, but the Warriors had a season for the ages.  Ok, how about the Raptors who  won forty-six more times than the Philidelphia 76ers.  Yes, but they are a miserable tank job.  But even the Spurs won thirty-seven more games than the New Orleans Pelicans who have a superstar of their own in Anthony Davis.  The reality is that the gap between the best and worst NBA teams is significantly bigger than the same gap in the NHL.

So, while excitement over the young talent on the Maple Leafs is both genuine and justified, it might be fuelled in part by the understanding that the championship mountain that the Leafs need to climb isn’t nearly as steep as the precipice the Raptors are scaling.